To commemorate the 100th anniversary of the University of Lithuania, Vytautas Magnus University (VMU) will host the World Lithuanian University (WLU) Symposium that will take place on October 27–29, 2022.

Inspired by this tradition born in the Lithuanian American community in 1969, to commemorate the centennial of the University of Lithuania, in 2022 VMU will once again invite representatives of Lithuanian and world Lithuanian scientific and creative communities to gather at the premises of Vytautas Magnus University, this time at the VMU World Lithuanian University Symposium.

The symposium will be held at Vytautas Magnus University in Kaunas. It will also be possible to participate in the event on the Zoom platform or watch it online on VMU’s YouTube channel.
The language of the event is Lithuanian and English, Lithuanian to English translation will be synchronized throughout the event.

The detailed program of the symposium will be published in September.

The main theme – "Freedom and its forms"

Today, the idea of ​​freedom is debated around the world. In the West – in one way, in the East – in another. Much time has passed since the era of Renaissance and John Locke. Has the cyber soil of our existence, the pandemic and the means to curb it, and the Russian aggression in Ukraine, which has already turned into, at the very least, a world war of emotions, disrupted the space of freedom to an extent that we do not even know how to return to communication and action?

The World Lithuanian University Symposium must be the time and place where attention is given to the current situation regarding the freedom of thought and public expression, which has been protected by the right of academic autonomy and independent scientific research for several centuries. Today, the challenges of freedom, rights, faith, and morality are becoming the most important topics which, due to their complexity, are not reduced to Twitter-level speaking. Therefore, maybe the community of the World Lithuanian University could still serve as the final trenches bringing together those who care about these issues.

Inspired by traditions, accompanied by history

The founding of the University of Lithuania in 1922 marked the beginning of the history of Vytautas Magnus University and its tradition, which, after the university closed in 1950, lived on in one form or another in other Lithuanian higher education institutions and academic gatherings of the diaspora. “While celebrating the centennial of the University, an equivocal splitting of tradition might take place in today’s Lithuanian higher education institutions, so the symposium could be a space for deeper understanding and communication, helping to preserve the common memory and the idea of the University in both homeland and world Lithuanian communities,” says Egidijus Aleksandravičius, Professor of History at Vytautas Magnus University. 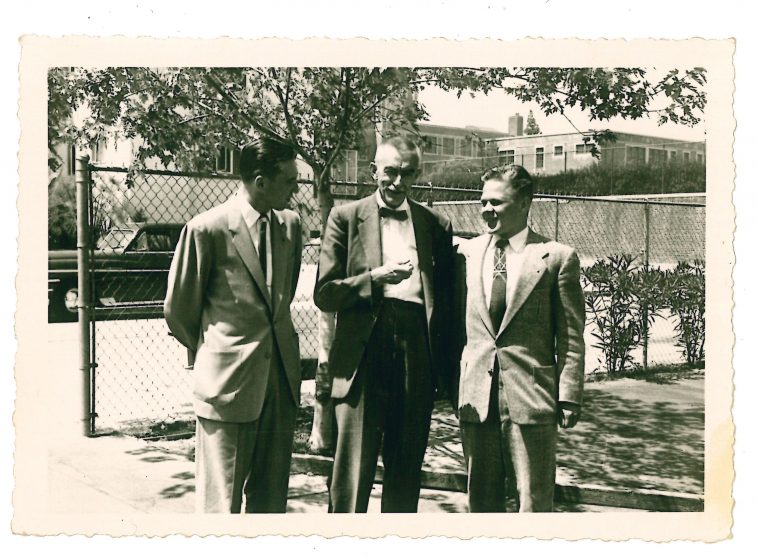 Algirdas Avižienis, professor at the University of California and the first rector of the re-established Vytautas Magnus University, in an interview with “Mūsų Vytis” (transl. “Our Vytis”) in 1992 recalled the duties imposed on him by Professor Steponas Kolupaila several decades ago:

“Professors Mykolas Biržiška, Ignas Končius and Steponas Kolupaila were honorary members of my student scout corporation Vytis. They visited our camps, took part in various commemorations, always reminded us in an interesting and clear manner of the work done by the University of Lithuania and obliged us to strive for the restoration of Lithuania’s independence and the re-establishment of the University. On February 16, 1953, Professor Steponas Kolupaila accepted my oath and the oath of three of my colleagues at the University of Illinois, Urbana, presented us with the Vytis Corporation ribbons, and obliged us to return with them to Vytautas Magnus University. I am truly happy that I was able to keep this promise,” Avižienis, the first rector of the re-established Vytautas Magnus University, shared his memories at that time.

“In a sense, VMU, re-established in 1989, was the result of the joint work of Lithuanian and Lithuanian diaspora scientists and artists. It became the university of world Lithuanians, which united, mobilized and developed not only the academic forces of the diaspora, but, more importantly, united scholars of the diaspora who had not lost contact with their homeland and Lithuanian academics that had survived the Soviet era,” says Aleksandravičius.

Today, VMU World Lithuanian University (WLU) is dedicated to fostering the scholarly works, creations and intellectual discussions of world Lithuanians. It is a platform whose projects, initiatives and ideas aim both to continue the work started in 1989 by Prof. Algirdas Avižienis, Prof. Bronius Vaškelis, Valdas Adamkus, Prof. Kęstutis Skrupskelis and other world Lithuanians who contributed to the re-establishment of the university, and to foster the ideas proposed at that time.

The symposium and its opening events will emphasize the importance of the collective wisdom of world Lithuanians, and, taking into account the issues of recent years and the upcoming 100th anniversary of the University of Lithuania, will invite to discuss topics on freedom and its forms.

The program of the symposium includes the following plenary sessions:

Political scientist Dr. Darius Udrys, a member of the organizational committee of the current and the 2019 symposium, said: “We gather as Lithuanian scientists and creators to scientifically and creatively discuss the problems and challenges relevant to us and our nation. We cannot sit and wait for someone else to generate and implement ideas and solutions. Who will think scientifically and creatively about Lithuania, its future and its role in the world if not us, Lithuanians? That is the value of this event. Every scientific solution begins with creativity, and ideas tend to generate and develop quicker when we create favorable conditions and support for their emergence and development. That is the goal of our symposium – a scientifically and creatively minded Lithuania,” says Udrys and personally invites those who wish to create this kind of Lithuania to contribute.

In 2022, the World Lithuanian University Symposium will not be split into separate parallel sessions. The whole program will take place in a linear manner thus allowing creativity, discussions and coexistence to unfold as if in a long coffee break.

The preliminary program of the symposium is available here.